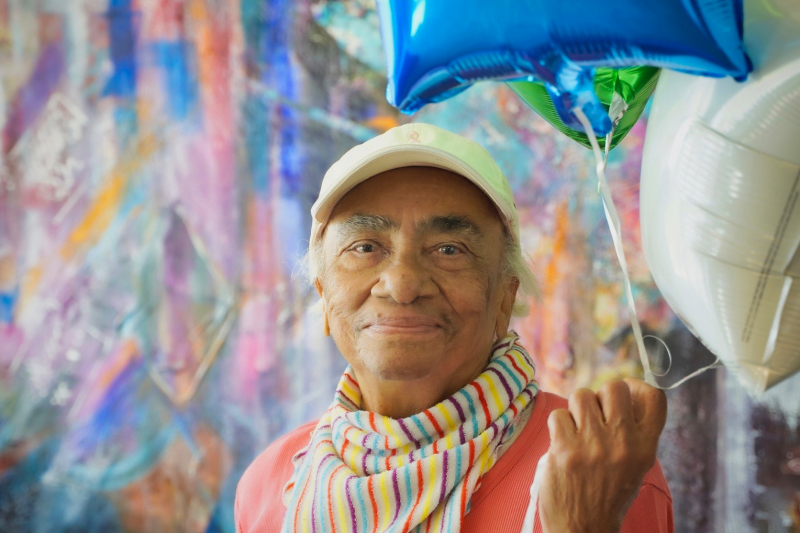 At age 93, Pearl Asbury joined a study at the Duke CTSI office in Kannapolis at the North Carolina Research Campus to better understand kidney disease in people of African ancestry.

“I always wanted to be involved in a study just for Afro-Americans. It is wonderful because for so much of our history, our health has not been understood,” said Asbury, who became the 100th person to enroll. “At 93, it might not help me, but it might help my children, grandchildren and great-grandchildren.”

Asbury read an article about the Duke APOL1 Study in Kannapolis. The study, led by Duke nephrologist Opeyemi Olabisi, MD, aims to understand why people of African descent are four times more likely to develop kidney disease than Caucasians.

“To my knowledge, I have never had any problems with my kidneys, but I know that Afro-Americans are prone to have problems with kidney disease,” said Asbury, who still lives independently in Concord. “I have already lived much longer than anyone in my family history  that I am aware. Maybe they can learn something from me.”

Asbury joined the APOL1 Study as a healthy control — someone without kidney disease who serves as a comparison for researchers.

Asbury, who has been a participant in other Duke studies in Kannapolis, advocates for clinical research wherever she goes. She’s such a convincing ambassador that her daughter, Jeanne Dixon of Kannapolis, also joined the APOL1 Study.

Like her mother, Dixon supports research that focuses on people of African ancestry so future generations can better understand their health.

“We have been underrepresented in research for so long,” Dixon said. “We are just catching up.”

Olabisi said he is thrilled to have the mother-daughter duo enrolled in the research. People of African descent have a high risk of kidney disease because of changes in the apolipoprotein L1, or APOL1, gene. In the United States, 13 percent of Black people carry APOL1 gene changes that cause kidney disease.

“This family is contributing in a wonderful way to our study,” Olabisi said.

Olabisi said there is an urgent need to understand why some people who carry the variant APOL1 gene avoid kidney disease.

Asbury was just 7 years old when her mother died after giving birth to a little boy. Her baby brother died a few months later. The tragedies left the family with questions that remain unanswered to this day.

Asbury graduated from high school in 1947 and became a domestic worker, one of the few jobs available to Black women without a college degree at the time. She worked for the same family of textile mill executives for nearly 27 years, helping to raise their children while raising her own three daughters as a single mother.

As times changed, she had the opportunity to start a career in health care. She worked as a nursing assistant at the former Cabarrus Memorial Hospital until she retired. Working in the medical field, as well as the mystery surrounding her mother’s death, inspired Asbury to become interested in clinical research, she said.

Dixon, who lives in Kannapolis and is retired from the N.C. Administrative Office of the Courts, said her mother sets an important example.

“As a Black woman, I am always interested in whatever is going to sustain life, so that we as a culture can live a long and healthy life,” Dixon said. “These studies are not so much for me but for the generations after me — discoveries that will benefit the lifestyle, health and wellness of my daughter and granddaughters.”

“We are study participants in research for African Americans at a facility that stands where she once could only get a job as a domestic worker,” Dixon said. “It’s remarkable.”

To learn more about the Duke APOL1 Study, which is now closed, visit www.bit.ly/DukeAPOL1.

The Duke Clinical and Translational Science Institute (CTSI) catalyzes and accelerates the innovation and translation of scientific discoveries into health benefits for patients and communities through collaborative research. Our NIH Clinical and Translational Science Award funding enables us to offer programs, project management and navigator services, and data sharing and informatics resources that provide essential support to move ideas from the laboratory through early-phase clinical trials, and facilitate education for current and future translational medicine researchers. For more information, visit ctsi.duke.edu.