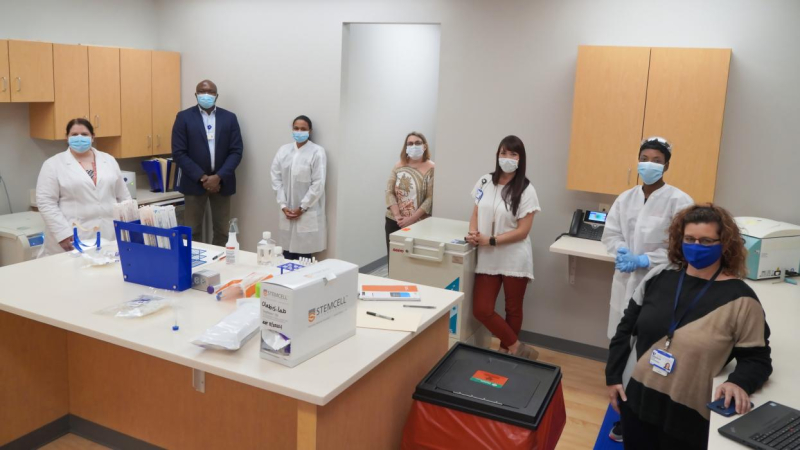 Through her participation in COVID-19 research with the Duke Clinical and Translational Science Institute (CTSI), Connelia Houston learned about a new study in Kannapolis for people of African descent.

The Duke APOL1 Study at the N.C. Research Campus needs people like Houston who are 50 or older, have African ancestry and do not have kidney disease, diabetes or HIV. Houston, an attorney in Charlotte who lives in Harrisburg, decided to enroll.

“I was interested in this study due to my African ancestry, and I was so very pleasantly surprised at how easy everything was,” Houston said. “I felt great after I did it.”

Participants provide small samples of blood and urine that scientists will use to better understand why people of African descent are four times more likely to develop kidney disease than Caucasians by studying gene mutations that increase the risk of kidney disease.

People of African descent have a high risk of kidney disease because of changes in the apolipoprotein L1, or APOL1, gene. In the United States, 13 percent of Black people carry APOL1 gene changes that cause kidney disease.

Dr. Opeyemi Olabisi hopes to change that. Olabisi is the principal investigator of the Duke APOL1 Study, based in Durham and now Kannapolis. His research could pave the way for innovative prevention and treatment of APOL1-associated kidney disease.

He partnered with CTSI’s Translational Population Health Research group and the MURDOCK Study, Duke’s landmark research study based in Kannapolis, to recruit people with African ancestry living in and near Cabarrus County.

“We are excited to launch the second site for our study and enroll people from Kannapolis, Concord, Charlotte and the surrounding area,” Olabisi said. “There is an urgent need to understand why some people who carry the variant APOL1 gene avoid kidney disease, as well as the molecular pathways of disease activated by the mutation.”

Half of people on dialysis don’t live more than three years.

“That's where my sense of urgency comes from,” said Olabisi, a rising star who was jointly recruited to Duke University in 2019 by the Department of Medicine and the Duke Molecular Physiology Institute.

For Houston, joining the Duke APOL1 Study allowed her to contribute to research that could make a difference in her community.

“If by giving a little bit of myself I could help someone else, I want to do that,” she said. “This is something that’s easy to do and give back.”

Her daughter, who graduated from the Rowan County Early College and now attends Duke University, wants to study endocrinology. This also made Houston interested in the Duke APOL1 Study and supporting new discoveries in kidney disease to understand why people of African descent are at higher risk.

“I hope this study will have an effect down the line and can start conversations about improving people’s health,” Houston said.

ABOUT THE MURDOCK STUDY

The MURDOCK Study is Duke’s landmark longitudinal translational research study working to reclassify health and disease through advanced scientific technologies, expertise from Duke researchers, and close collaboration with a strong network of community partners. One of the largest and most unique studies of its kind in the world, the MURDOCK Study ultimately aims to identify linkages across major diseases and disorders to help defeat some of today’s leading causes of illness and death. MURDOCK is an acronym that stands for the Measurement to Understand Reclassification of Disease Of Cabarrus and Kannapolis. For more information, visit DukeTransPop.org.

The Duke Clinical and Translational Science Institute (CTSI) catalyzes and accelerates the innovation and translation of scientific discoveries into health benefits for patients and communities through collaborative research. Our NIH Clinical and Translational Science Award funding enables us to offer programs, project management and navigator services, and data sharing and informatics resources that provide essential support to move ideas from the laboratory through early-phase clinical trials, and facilitate education for current and future translational medicine researchers. For more information, visit ctsi.duke.edu.