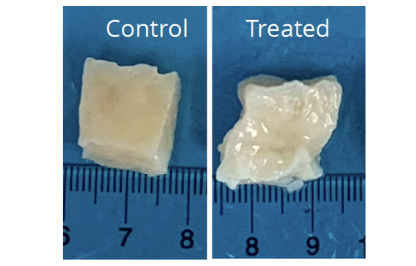 A collaboration by researchers at Duke and North Carolina Central University is aiming to offer a more convenient, less invasive treatment for uterine fibroids, one of the most common—and under-studied—issues in women’s health.

As many as 70% of women will develop uterine fibroids by age 50—benign tumors made of stiff collagen tissue that grow on the uterus. Sometimes these growths are harmless and can even go undetected, but in many cases they cause symptoms ranging from pain and bleeding to infertility. Uterine fibroids are even more common among Black women, who also tend to be affected earlier in their lives.

After nearly a decade of working in parallel at campuses separated by just four miles, Friederike Jayes, DVM, PhD, Assistant Professor in Obstetrics and Gynecology at the Duke University School of Medicine, and Darlene Taylor, PhD, Professor of Chemistry and Biochemistry at NCCU, are now combining their research to advance a fundamentally new approach for treating uterine fibroids.

Jayes has long been fascinated with this problem, and is involved in developing a new therapeutic treatment using a drug capable of breaking fibroids down inside the body. Since the tumors are collagen-based, the key ingredient in this intervention is collagenase, an enzyme that digests collagen. Meanwhile, Taylor has created a product called LiquoGelTM, which serves as a platform to deliver drugs to targeted locations inside the body.

Having known one another since 2008, they’d long imagined combining the two lines of inquiry to fill what Jayes calls “the unmet need” of uterine fibroids.

“It was wishful thinking,” Taylor says. And Jayes adds: “We didn’t have the means to put them together.”

That changed in 2019, when they got their chance in the form of a pilot project grant from the Duke Clinical & Translational Science Institute designed specifically to facilitate Duke-NCCU collaboration. The grant provided both funding and project management support.

“That funding award allowed us to combine the drug with LiquoGelTM for the first time and do a study,” Taylor says. “The project management piece was phenomenal as well. I don’t know that we would be where we are right now without that kind of support.”

To understand how this combination works in practice, Taylor says you can imagine a bowl of gelatin with chunks of fruit suspended in it. In this analogy, LiquoGelTM is the gelatin, and the fruit is the fibroid-digesting drug. But there’s one key difference: unlike a gelatin you would eat, which solidifies as it cools in the refrigerator, LiquoGelTM firms up when it is warmed.

“The beauty of LiquoGelTM,” Taylor explains, “is that it’s liquid at room temperature, and it becomes a gel at body temperature. Because of that, it gets delivered to the fibroid and becomes a gel. The co-dissolved drug is trapped during the gel process and it’s much less likely that the drug will be washed out.”

In other words, the drug can be injected directly into the desired area and it will stay there, doing its work without affecting other parts of the body. Over time, the LiquoGelTM partially degrades, allowing the body to get rid of it.

Jayes and Taylor feel that uterine fibroids, because they are almost never fatal and only affect women, have not received the scientific attention they deserve.

“In my eyes, it’s one of the typical ‘women’s diseases,’” says Jayes. “Women suffer, but it often gets minimized.”

Several other treatment options do exist, each with advantages and drawbacks. The ultimate resolution to uterine fibroids is a hysterectomy—major surgery to remove the uterus. While this solves the problem permanently, it also entails a lengthy recovery and means the patient could never again become pregnant.

“For some women, a hysterectomy is not desirable,” says Jayes. “It’s not a small thing. It is major surgery with risks.”

There are also less invasive surgeries to remove the fibroids, but this doesn’t prevent regrowth and still involves pain and recovery. Certain medications can help, including birth control and other hormonal treatments, but these also have systemic effects on the body.

The combination of LiquoGelTM and the collagenase drug, by contrast, could be administered in a doctor’s office and would only act locally on the tumor itself.

While the Duke-NCCU award “stabilized the collaboration,” according to Jayes, much work remains before it can reach patients.

The team has secured follow-on funding from North Carolina Biotechnology Center to conduct scale-up production of LiquoGelTM and time-course studies as well as other essential research to facilitate the process of enabling clinical trials and ultimately seeking FDA authorization. At the same time, they intend to look at the social side of the uterine fibroid problem: what perceptions, beliefs, and cultural issues inform the care women receive, and the care they want?

“We need to know if people would adopt the LiquoGelTM intervention,” says Jayes. “Where is this most needed, and what is the most desirable characteristic of it? We want our work to enrich the fibroid field.”